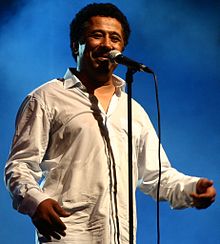 He began recording in his early teens under the name Cheb Khaled
(الشاب خالد, Arabic for “Young Man” Khaled, as opposed to the
traditionalist Sheikh elders) and has become the most internationally
famous Algerian singer in the Arab world and across many continents. His popularity has earned him the unofficial title “King of Raï”. His most famous songs are “Didi”, “Aïcha” and “C’est la vie”

Khaled Hadj Ibrahim was born in 1960 in Oran’s Eckmühl neighborhood, Algeria. At the age of 14, he founded the Cinq Étoiles (Five Stars) band and started performing in nightclubs and during marriages.

In the 1980s, Khaled started producing and singing raï songs. He moved to France in 1986.

On 12 January 1995, Khaled married Samira Diabi, 27, with whom he has four daughters and one son.

In 1998, the documentary Khaled: Derrière le sourire was produced, recounting his life.

He was awarded Moroccan citizenship in August 2013, which he didn’t ask for but accepted because he felt he could not refuse.